The show was titled after a film by Eduardo Paolozzi, made in 1962, which collaged together images of objects, architecture and landscapes, to explore ‘the surreal and uncanny’. (It’s on the right in the photo below.)The other works in the show explored ‘the increasingly insatiable appetite for acquisition, whether material, cultural or ideological.’ 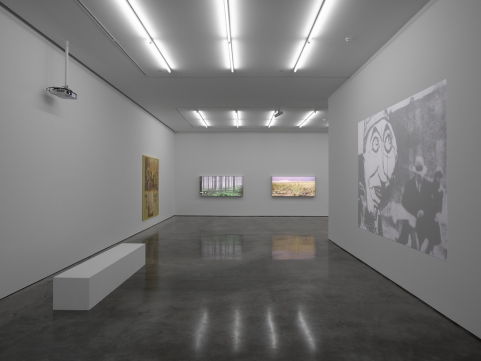 I found it hard to get into this show. Josephine Meckseper’s Sabotage on An Auto Assembly Line 2009, was a conveyor belt with tires and 2 TV screens, one showing a video of a shattered windscreen and the other a collection of TV ads for new cars. I just don’t see how this ‘deconstructs the mechanisms of capitalism’.

There were two paintings by Mike Bouchet of a man riding a bull down a hillside: this sounds weird but they were immediately recognisable as referring to the classic ‘Marlboro man’ cigarette adverts. Only they were painted using Diet Coca-Cola, one with light figure on dark ground and the other reversed. The thing is that they were very lovely, like a sepia-toned lament.

I was also interested in Thomas Bayrle’s i-Phone meets Caravaggio 2015, in which repeated images of an iPhone were put to together to create a copy of a Caravaggio painting, The Inspiration of St Matthew.  Here are the two works for comparison. Although there is something intriguing about the work, in the end it still felt a bit gimmicky; I wasn’t sure there was anything much conveyed by recreating it using the iPhone as the unit of depiction. The comparator that came to my mind was Marcus Harvey’s notorious Myra 1995, where using a child’s handprint as a repeated element to build up a copy of the iconic photograph of convicted murderer Myra Hindley conveyed a powerful set of feelings.