Damien Meade, one of the participating artists, talked about how he had resumed painting after a career in web-design, focussing on disembodied – dismembered, even – human features. He makes models from plaster and plasticine and paints from those. Mark Fairnington, another participating artist and Reader in Painting CCW, was interested in the idea of the specimen and the human figure as specimen. He treats portraits as still life. He talked about working in the Wellcome Collection, where he was able to view preserved body parts. Again the idea of disembodiment and dismemberment.

Frances Woodley, artist, academic and curator, spoke about the concept of the abject in still-life, especially 17th century. She explained the idea of the ‘abject’ with reference to its etymological origins: Latin ab = away, from and iacere = to throw. So abjection is the act of moving, even throwing, something away from us into an uncertain space, and in our culture one that implies revulsion, disgust or some other negative feeling. She suggested that the concept of ‘abject’ had to be considered in each specific cultural and historical context.

Fiona Candlin, Senior Lecturer in Museum Studies at Birkbeck University of London and co-author of ‘The Object Reader’, introduced her work as being about how people experience things, especially the history of the concept of touch. Her recent and current work is about small museums and galleries – Micromuseology – of which there are at least 1500 in the UK. Most thinking and writing about curation and objects deals with major venues like the British Museum or Tate Britain & Modern, but different ideas arise when looking at small, private, localised venues.

She described visiting the Museum of Witchcraft in Boscastle, Devon: driving down into a steep, enclosed valley with a dog-leg which conceals the view of the sea for much of its length and arriving at an old building at the water’s edge, where you could hear but still not yet see the sea. This experience framed the visit before the visitor has even set foot in the museum.

What lingers with me is the thought that ‘small independent museums are about things that matter to people.’ There is a link here to the idea of the archive and storing things/experiences that matter to someone.

The group discussion circled round what ‘abject’ might mean: is it the subject? of the painting? or a quality endowed by the viewer’s reaction? Mark Fairnington said that he often didn’t see his own work as abject until he experienced reactions of revulsion or horror from others. He thought that the process of becoming familiar with an object, even a preserved disembodied head in a collection, removed any sense of abjection. Which seems to take us back to the etymological meaning: abjection is only possible if you distance yourself from the object; if it becomes familiar, it loses that sense.

Fiona Candlin mentioned the idea of tenderness towards an object co-existing with abjection, a sort of empathy with the position of the object. 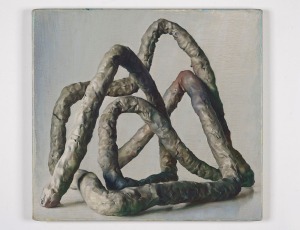 There was some discussion about the qualities of paintings of potentially abject objects, or as Fiona Candling said of Damien Meade’s paintings: ‘they are too nice [as paintings] to be abject’, a view I share – see the picture above.