Isabel Seligman works in the British Museum Prints and Drawing Department on the Bridget Riley Art Foundation exhibition project. Bridget Riley decided to make drawing a key part of her practice despite the lack of focus on drawing at art school. This project funded by her Foundation is intended to emphasise the importance of drawing and to encourage art students to draw from the work in the British Museum collections, continuing the tradition of copying from and being inspired by the work of the masters.

The first part of the project was a series of workshops for students, introducing them to around a dozen drawings on a theme. The students were encouraged to look closely at the drawings; then to discuss them; and finally to draw from the drawings. The workshops gave Isabel and other staff the chance, not often available to curators, for a dialogue with the intended audience of the second part of the project, a proposed exhibition.

Students were exposed to drawings linked across the centuries, which became the organising principle of the exhibition. For instance, as in the photo on the left, a Rembrandt self-portrait which seems to be focussed on facial expression, especially the open mouth, is juxtaposed with an Anthony Gormley print made by pressing his mouth to the etching plate. 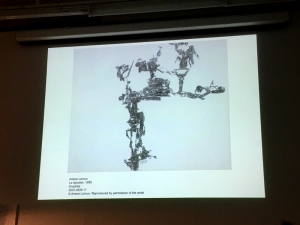 Isabel talked about the value of seeing drawings in the flesh. She showed this drawing, Le Bijoutier by Ariane Laroux, illustrating how it could be viewed online at increasing levels of zooming in, but only in real life can we see both a detail and the whole at the same time.

The workshops revealed considerable differences of view about the value or purpose of ‘drawing from drawings’. Some students thought copying was merely mechanical – a way of making a ‘lookalike’ drawing. But copying in order to learn how a work was originally made has a long history and is more concerned with process – how did the artist do this and what can I learn about it – than outcome – whether I made a ‘photorealist’ copy. Joshua Reynolds recommended copying ‘the conception’, but not ‘the touches’ of the masters.

The resulting exhibition, now on tour round the country, was organised around ideas of different types of thinking carried out through or shown in drawing. Drawings of very different dates were shown together. In the section The Thinking Medium, were a page from an Egyptian Book of the Dead, showing the weighing of a priestess’s heart and also a drawing by Michael Landy for his project Break Down 2000, in which he destroyed all his possessions. Both illustrate rituals and Isabel described them as ‘maps for an afterlife’, albeit of different kinds.

Works by Picasso, Dürer, Bridget Riley and others showed the breadth of the Museum’s collection and the opportunity for making connections between apparently very different pieces. We are due to visit the Prints and Drawing Department for a workshop ourselves in February. This lecture reinforced for me the potential value of ‘drawing from drawings’, something I have avoided doing hitherto. I think that’s because of a lack of confidence in my own skills, imagining that the object would be to make a ‘proper copy’. It will be interesting to approach the workshop with a more open mind.