My Peer Workshop was designed to test the hypothesis that what we remember about an image when we draw it from memory is linked to the nature of our emotional response to it. This idea emerged from my own experience of using my family photographs as the basis for making drawings: after my first, usually more or less realistic, drawing from an image, I can often recall only part of it, sometimes only a few lines, which relate to the heart of the emotional content.

Obviously, the emotional content is greatest for me because they are photographs of my family, but given my research into memory and forgetting, I wondered whether heightened emotion of any kind would affect memory.

The full proposal for the workshop is here

and the shorter version sent to participants in advance is here

I didn’t want to tell everyone about the second part of the workshop, so that it would not influence how and what they drew in the first part.

I gave everyone a copy of this photograph:

I explained that the man in uniform in the centre was my father, in Brussels in June 1945. I invited everyone to make a drawing in response to the image. It could be a reproduction, realistic, abstract, in any medium … I took 4 participants out of the room to share with them some more information: that the young woman in the photo was my father’s then fiancée, although they never did get married. I also told them that I had rarely seen my father look happier than he did in the image.

At the end, I asked people to comment on their reaction to the image and whether and how they felt this had affected what they drew and what they could remember. Below are the pairs of images with some key comments. Work by the people who didn’t get the extra information about the picture is shown first.

Ali mentioned the vintage feel of the image: soft focus, people smoking, the way they dressed. Very much ‘of the era’. Anna focused on the obvious feelings of joy and shared love which she felt was perfectly expressed by the hands linking them all together. This was her main impression and her remembered drawing was an amalgam of hands, creating the feeling of togetherness.

Nic liked the image of the group and their closeness, so she drew them, not the place they were in. In the remembered drawing, she drew the shadows, the shapes rather than the individuals. She remembered the scene as a sunny day, although in fact it wasn’t and there were only soft shadows.

Sarah had to leave before the second part of the workshop but in making her initial drawing she thought about the history of 1945. It was a familiar story in her own family. It made her think of the fragility of that moment of happiness contrasted with the trauma that generation had suffered; of their courage; and also of the sense of that particular time, especially evident through their clothes.

The next four people were the ones who knew that the young woman in the photograph was my father’s fiancée.

Ruth was interested in the story of the picture:  who was the photographer? a friend? someone who saw  them looking happy? had they just got engaged? is that why her parents were so happy? She too found the image very familiar. The way everyone was smartly dressed, the crease in my father’s trousers, marked the image as ‘of its time’. Her remembered drawing had the same elements, but looser, freer. And in fact the people were closer together and walking along, where in the first drawing they seem to be standing still.

Janine traced the image but was selective, drawing only my father and his fiancée ‘people in love in a bubble’. This was even more pronounced in the memory drawing. The image reminded her of war-time romantic movies, like Brief Encounter, with the fleeting moments of happiness which Sarah also referred to. 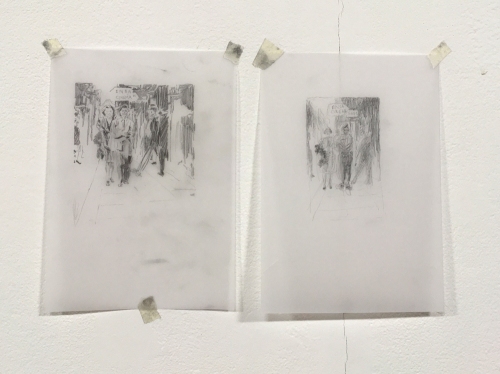 For Caroline the idea of the war dominated her first drawings: joy at the war ending but also sadness that my father would  ‘go bleakly into the future with ghost of the left-over fiancée’. Hers was a group not there any more. By contrast, her remembered drawing based on the picture was one of closeness and happiness. 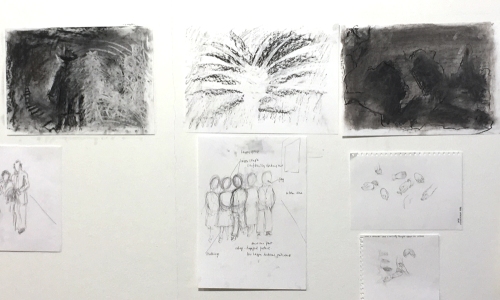 work by Caroline Holt-Wilson: top 3 drawings and centre drawing below 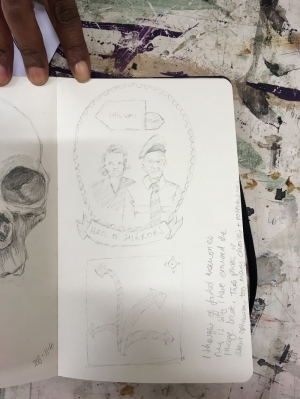 Charmaine had to go to a tutorial after the first stage so we didn’t get to see a remembered drawing, but her first one was based around the fragile optimism of the image. Like the whole period, life was full of possibilities and options for the future, but it was all uncertain – hence the hall of mirrors. The old-fashioned frame was something seen in most houses, and acted here like a cameo frame.

Laura had arrived after a tutorial and had little chance to draw. The personal nature of the image and its direct connection to me, made her think about paying it close attention, putting time into it and detail.  Yifei also had to go to a tutorial but did have time to do a beautiful enlarged drawing just of my father (no image yet).

Overall, the exercise did not support my hypothesis. The people who had more information about the people in the photograph did make more focussed initial drawings, but this didn’t have any impact on the remembered drawing. But there seemed to be no discernible link between feelings about the image and what they could remember. Several factors seem relevant.

Firstly, most people could recall much more of the image and in much more detail than I expected. That may say more about my abilities than anything else, but it meant that the selectivity that I observed in myself wasn’t really there. Janine suggested that this was because they made the second drawing immediately after the first so it was quite fresh; if there had been a gap of a week, they might have remembered less or been more selective. It hadn’t occurred to me that this could be a confounding factor. It would be tricky to overcome it in the context of an afternoon’s Peer Workshop, but it might have helped if, for instance, I had asked them to do another unrelated activity between times.

Second, several people’s responses were coloured by their own family history or memories, particularly if they were around my age. For my generation, it would be very common to have heard ‘war stories’ and seen pictures of relatives in uniform. These responses were thus to the general situation portrayed, not necessarily to this image alone. And their second work may have drawn on their own pre-existing associations and memories, not just those generated this afternoon.

Third, most people, if they expressed a feeling about the image, said similar things: obvious happiness and  joy (observed by those who didn’t know about the fiancée as well as those that did), the closeness of the group, the fleeting situation between the war itself and the uncertainties and disappointments of the aftermath. So it was not possible to trace any connection between different emotions and the quality of remembering. It would have helped if there had been someone who was bored by or hated the image!

Although the workshop failed to support my hypothesis, it is nonetheless true that for me emotional content affects not only my focus in an image but also what I most recall. And that is an approach I will continue to explore, as it seems to be something that generates a unique vision.