I had started to plan work for the final degree show before I wrote my essay. I was wrestling with the question of how to bring together episodes and images from different times in my life, to make some new connections between them. The essay, which you can read here,  clarified that I don’t need to find a single presentation that will somehow ‘do it all’. In fact, that’s probably impossible.

I had started with an idea about filling a small space with drawings; but I was concerned about the fixed nature of such a presentation. Also, the viewer would be inside the work, whereas I felt the viewer should be outside, while I was inside. The intention would be that different views or compositions would be made as the viewer moved round the work.

I haven’t entirely abandoned this idea, but two things convinced me that I was (maybe) overcomplicating things. First, a tutorial with Philip Goss suggested that there was already a lot going on in my drawings; they could stand on their own, without needing some fancy installation. In a tutorial with Tania Kovats, she also suggested thinking more about the feeling I wanted to convey to the viewer, rather than the form of an installation. Second, what emerged from my research was a conviction that using repetition and looking for ‘the thing you don’t know you saw/knew’ would be more productive especially over the longer term.

I remember fellow student Ros Barker saying in her final assessment presentation last year that she had come to realise that the final show was really not a full stop, but a beginning. I nodded along at the time, but it’s only now that I fully grasp what she meant, and the importance of the MA as a springboard, not a summation. 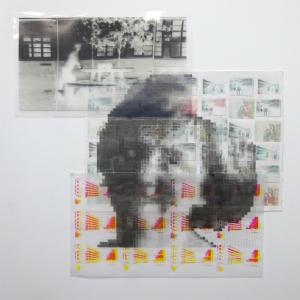 So, here is what I have just finished: a composite drawing, using a pinhole camera image on film, a photo transfer background and screen printing on tracing paper. A pixelated self-portrait is drawn in graphite over all three sections.

When I planned the work, I had in mind that I might want to show the drawing in pieces or exploded. So here are some other shots of possible ways of displaying the parts. 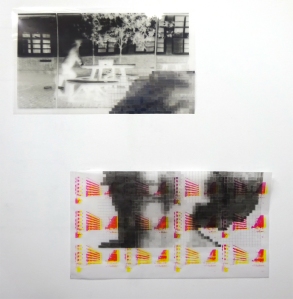 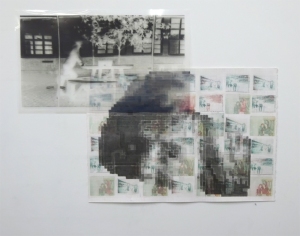 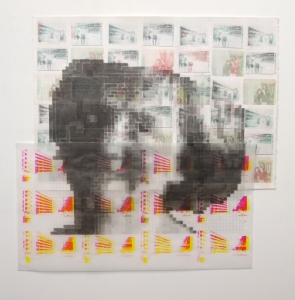